This is my analysis of the malware for Lab01-02 from the Practical Malware Analysis book exercises.

The Lab 1-2 malware that is to be analyized using basic static analysis techniques consists of the file Lab01-02.exe.

Upload the Lab01-02.exe file to http://www.virustotal.com. Does it match any existing antivirus definitions? 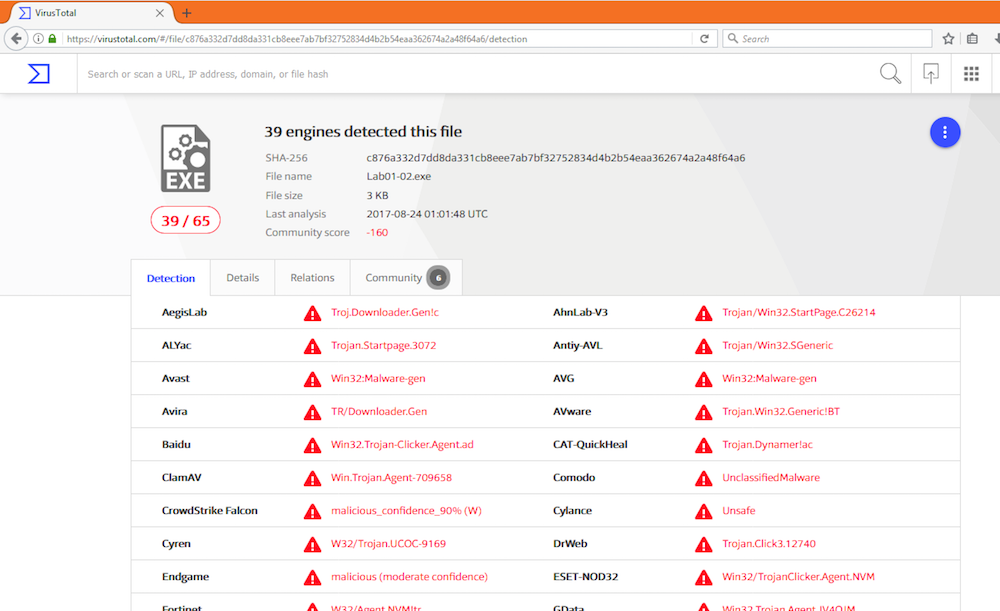 According to VirusTotal this malware has been seen before.

Are there any indications that this file is packed or obfuscated? If so, what are these indicators? If the file is packed, unpack it if possible.

We can gain some insight as to if the malware is packed or obfuscated in any way using strings, PEid, PEView, and IDAPro.

Using the strings utility on Lab01-02.exe we see the following:

The strings that are found do seem to indicate that the malware might create a service and reach out to the internet but the list of imports also seems small. From what was learned in the Practical Malware Analysis book, a malware that has few strings and has LoadLibary and GetProcAddress points to a high likelyhood that the malware is packed. We can gain more insight using PEid. 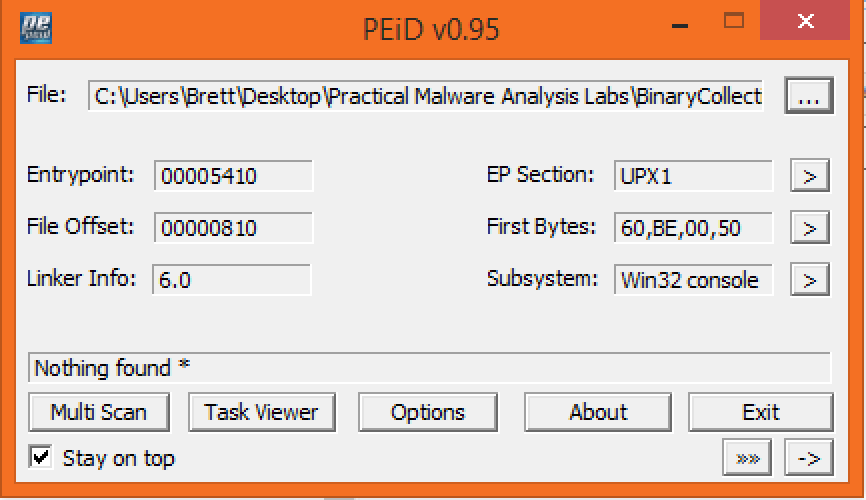 We can get more information using PEView.

Looking at the executable in PEView reveals some interesting things that hint at packer use. The sections are called: UPX0, UPX1, and UPX2. Sections of an exeuctable would normally include sections neamed like: “.text”, “.rdata”, and “.data”. The headers of the sections show that the “Virtual Size” is different than the “Raw Data” size. This means that the section takes more space in memory than on disk. This is another indication of packer usage. 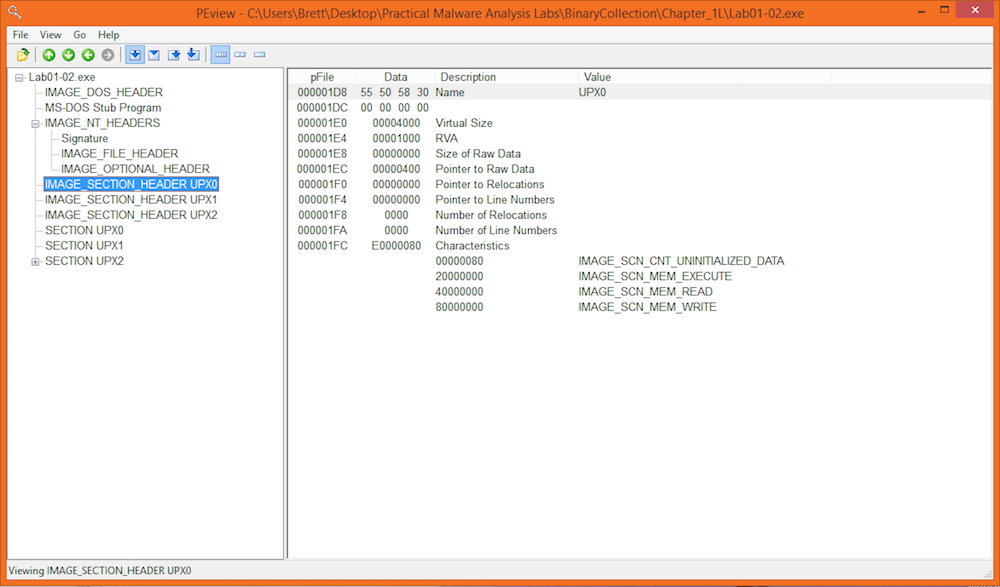 Finally, simply opening the executable in IDAPro warns that this executable seems to be packed or obfuscated:

Proceeding to open the executable anyways shows that the imports list of imports is quite small just like we saw in the usage of Strings. 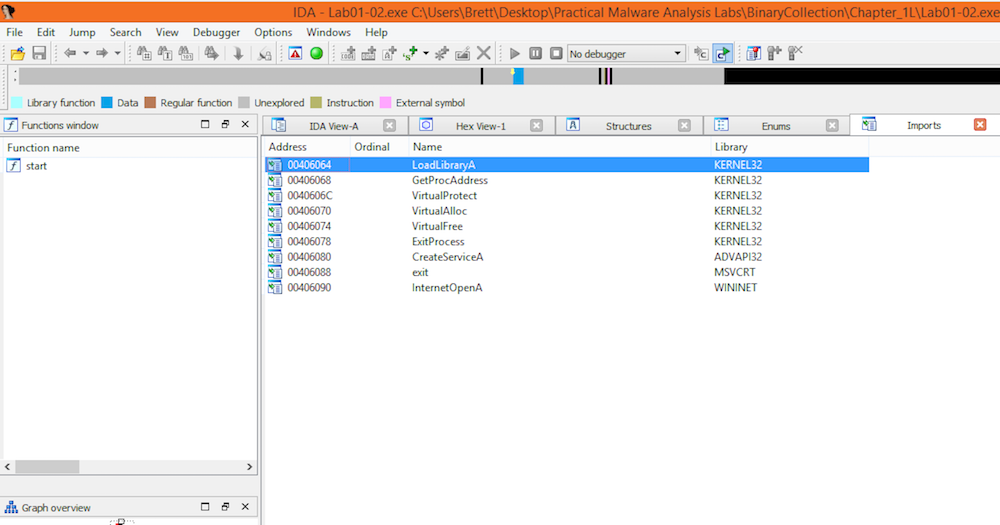 At this point it if fairly safe to assume that this executable is packed using the UPX packer. We can unpack the executable using:

Now that the executable is unpacked, opening it in IDAPro gives us a different story: 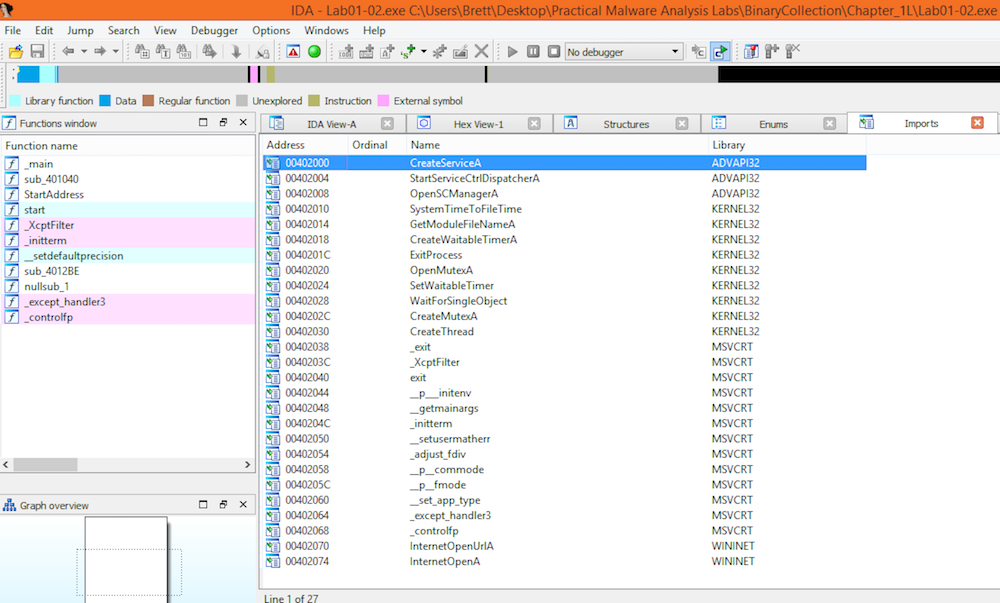 The list of imports has expanded to include many more functions.

Do any imports hint at this program’s functionality? If so, which imports are they and what do they tell you?

Some of the interesting imports that can be found are:

Based on these imports it seems that this malware sets up a Windows service. The malware also appears to reach out to a url.

What host- or network-based indicators could be used to identify this malware on infected machines?

Looking at the strings output after the unpacking of the executable the following strings can be found:

“MalService” seems likely to be the name of the service that would be running on the host. If “MalService” was found in the service list this would be a host-based indicator that the host was infected with the malware.

If network activity was detected going to “http://www.malwareanalysisbook.com”, this would be a strong network-based indicator that the malware was present on the system.

This concludes the analysis of the second malware of Lab 1 from the Practical Malware Analysis book. The techniques utilized where very similar to the techniques needed for the first malware sample with the twist of dealing with a packed malware sample. It will be interesting to see what new twist the next malware may have.