This blog post has been created for completing the requirements of the SecurityTube Offensive Internet of Things course.

During the Offensive Internet Of Things Exploitation course the instructor demonstrates a technique called a “NAND Glitch” on a Wink Connected Home Hub IoT device. 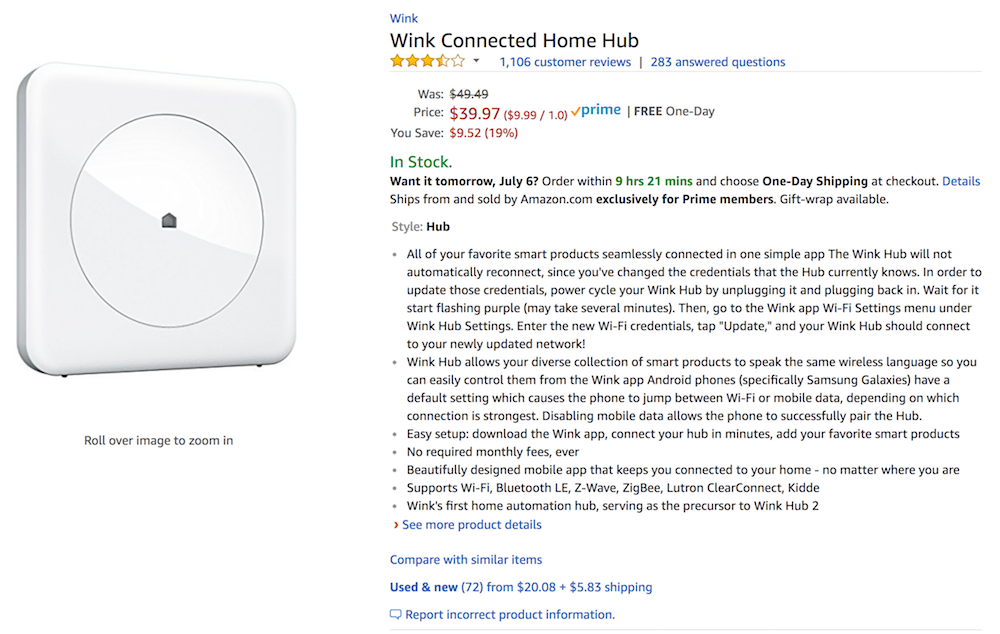 This technique allows a root shell to be acquired on a device which normally does not provide console access. This post outlines the process I used to replicate the NAND Glitch as well as discusses some of the “gotchas” that I encountered along the way.

The tools that I utilized to perform the NAND Glitch were:

The steps that I performed to gain a root shell on the Wink Hub device are as follows:

Disassembly of the Wink Hub is pretty straight forward. The device has 4 hex screws that need to be removed. Once these are removed there is 1 black circuit board that makes up the whole device. Pull the board out and begin the hacking fun. 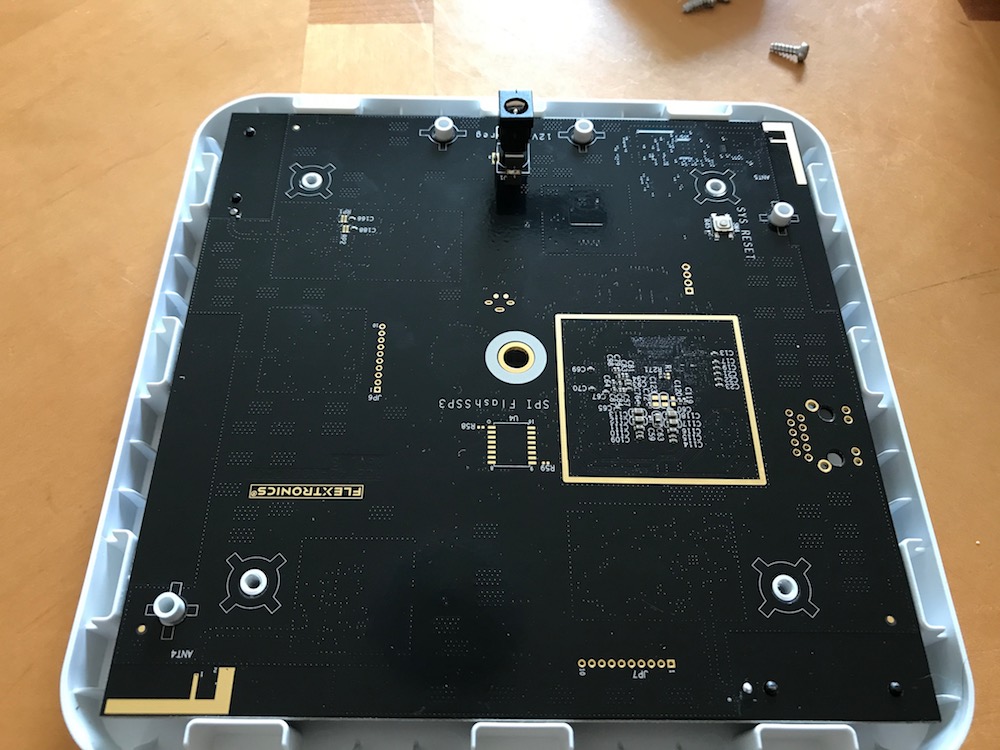 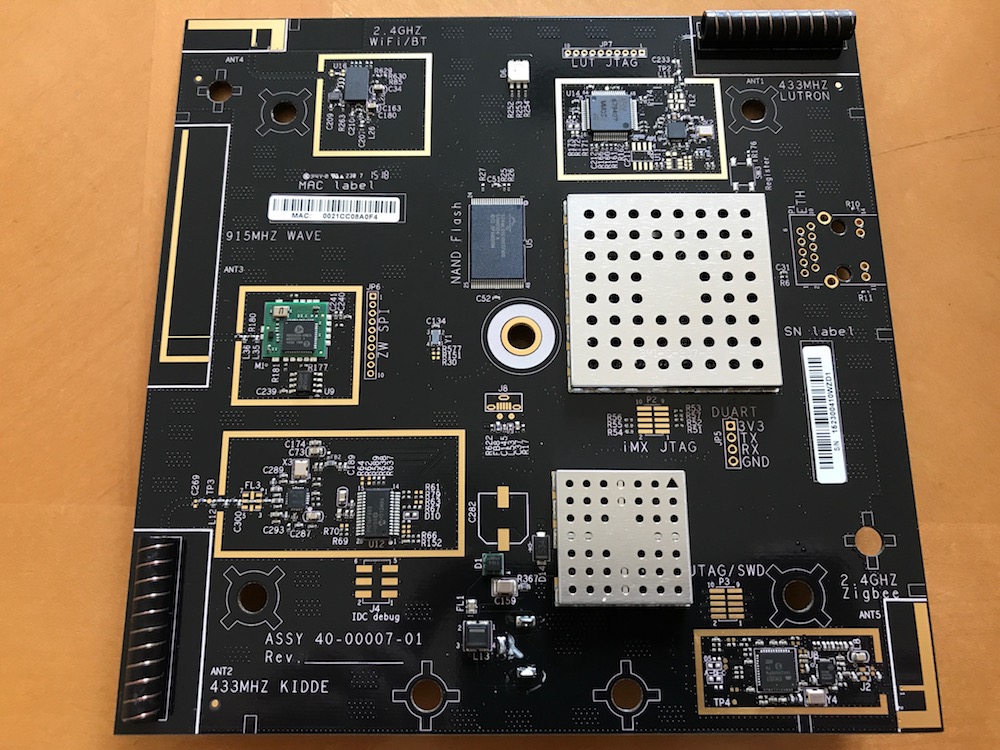 The Wink Hub circuit board does not have headers attached for UART serial interfacing but it does have the pin-outs marked. Simply solder some headers into the pin-outs using through-hole soldering and you’ll be set to connect to the device. When I did my soldering I hadn’t heard of a “Helping Hand Tool” so my soldered pins looked a bit crooked. This didn’t prevent me from getting a UART terminal connection but I learned that if I need to do more intricate soldering in the future, that one of these tools could really come in handy. 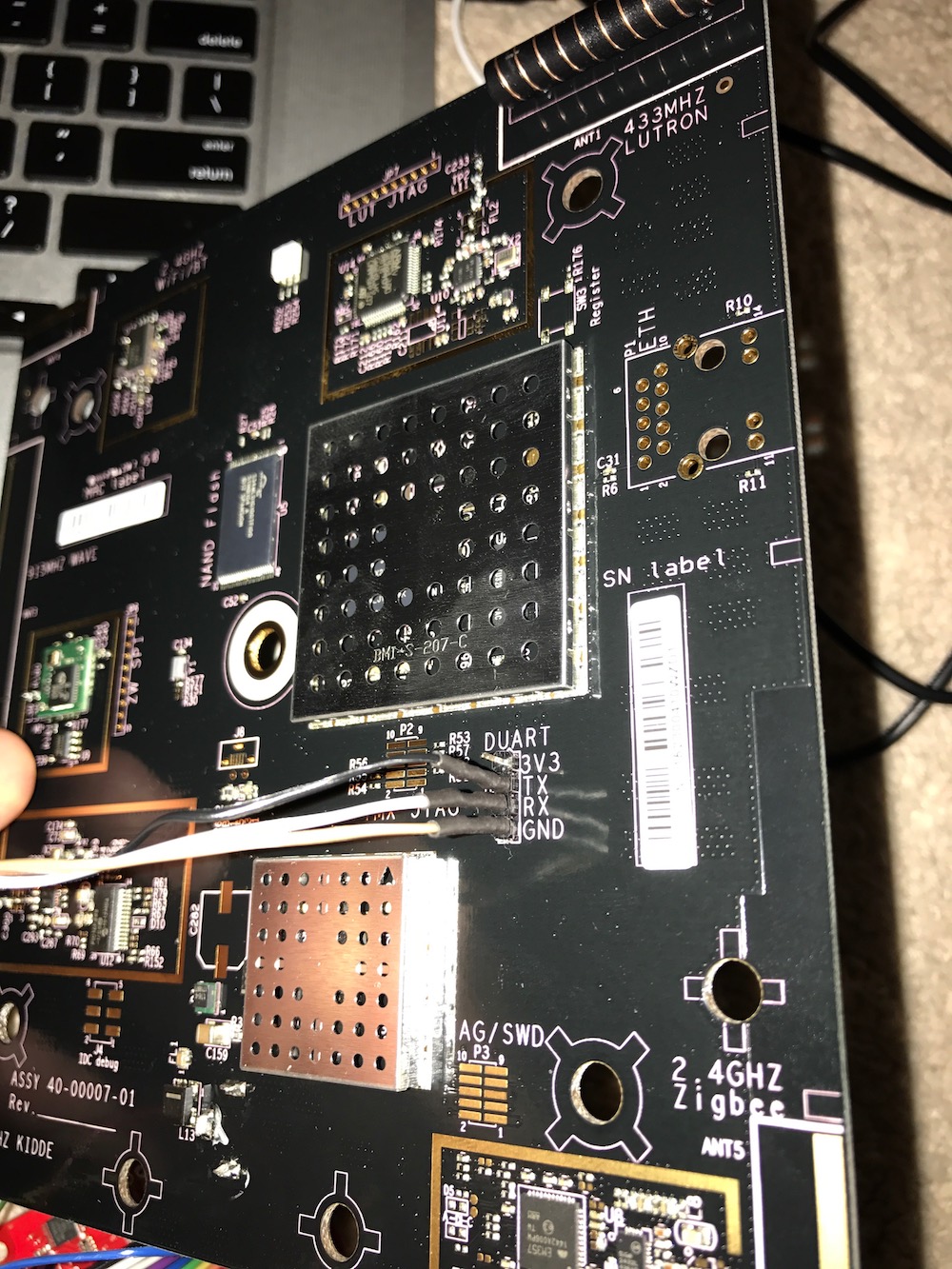 Hook Up The Bus Pirate

Hooking up the Bus Pirate is as simple as:

** NOTE: I encountered a bit of trouble / confusion with the cable. I didn’t know that there were actually different cables available with the colored wires organized in different orders. I eventually came across this Wiring Diagram which illustrated that the cable that I had purchased actually had the colors reversed from what I was seeing in other diagrams. 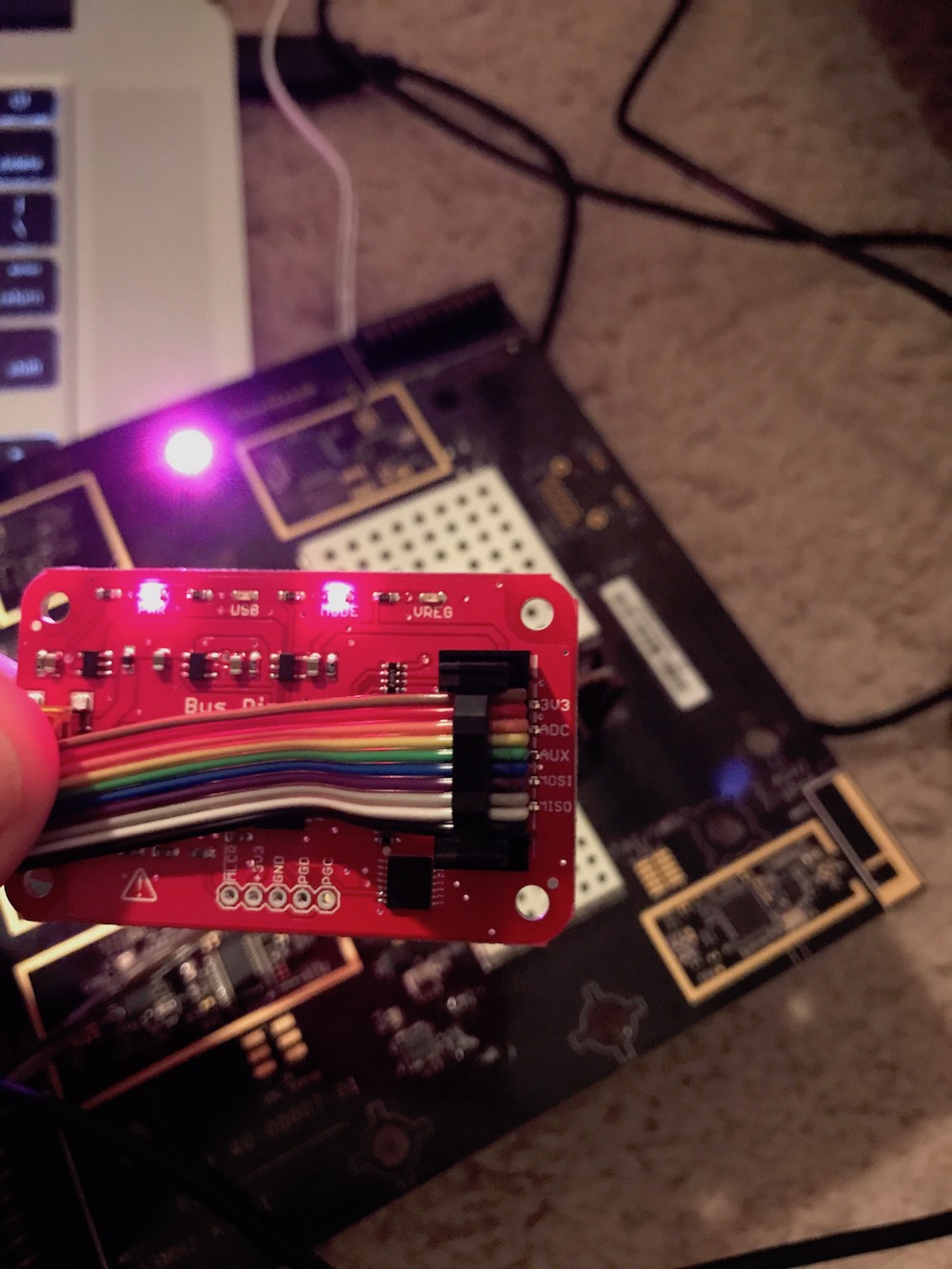 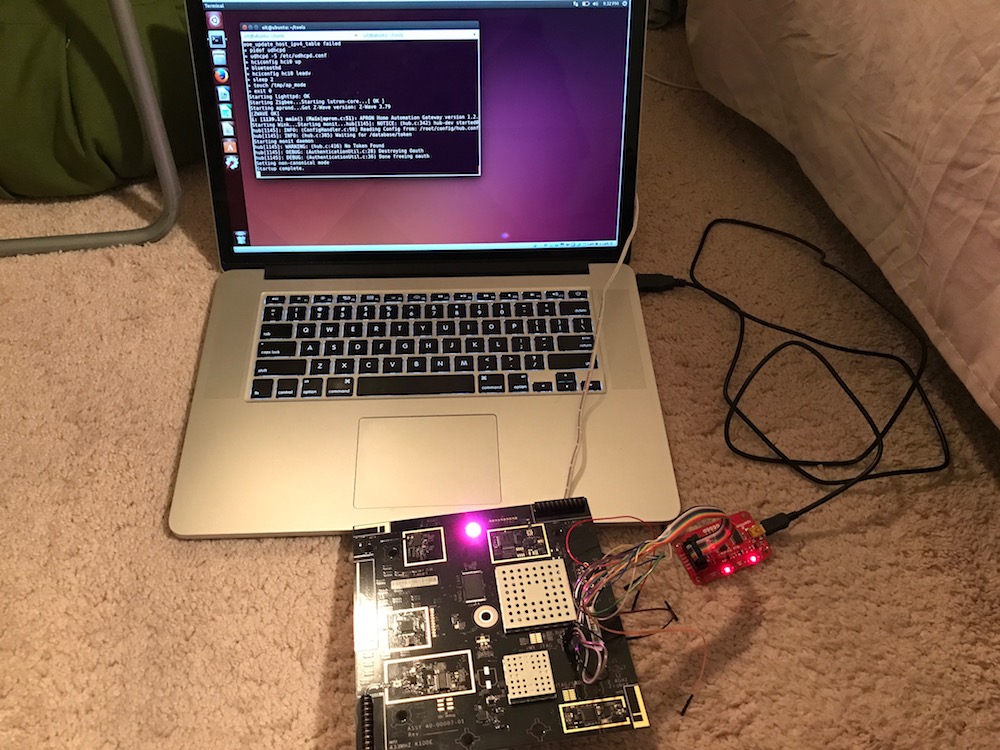 Once connected, I was presented with a prompt for the Bus Pirate. I believe I actually received a black screen which required me to hit enter to actually see the prompt. Another thing I learned in this project is that serial work can be a little flaky. Through this prompt you configure the Bus Pirate to become a “bridge” which allows UART communication to pass thru the Bus Pirate and to the device you are communicating with.

In this prompt I used “m” to configure the mode of the Bus Pirate as UART. In this configuration wizard all of the defaults are selected except for a baudrate of 115200 and 3.3v as the voltage of the device.

After the UART mode was configured, I started a “Transparent UART Bridge” via the macro (1).

** NOTE: After setting this up and booting up the Wink Hub, the text on the screen would come out looking like garbage. I did a bunch of Googling and research and it seemed that I also had to set the baudrate using the “b” menu to 115200 prior to setting the mode to UART using the “m” option and going through the wizard. I don’t remember why I had to do this but that seemed to clear up the garbage output.

After the Bus Pirate is all configured and a serial screen connection is setup, the next step was to actually start up the Wink Hub and glitch the NAND chip. To perform the glitch I used a piece of wire with one end touching some of the metal chip housing, and the other end touching the 29th pin of the NAND flash. It took a few tries to get to work as I found that I had to create the short in less than a second after starting up the Wink Hub. Other articles I had found on the subject said to create the short after ~1 sec but I found that it needed to happen much sooner than that. As soon as the short worked, I would receive a terminal prompt after a kernel panic message. 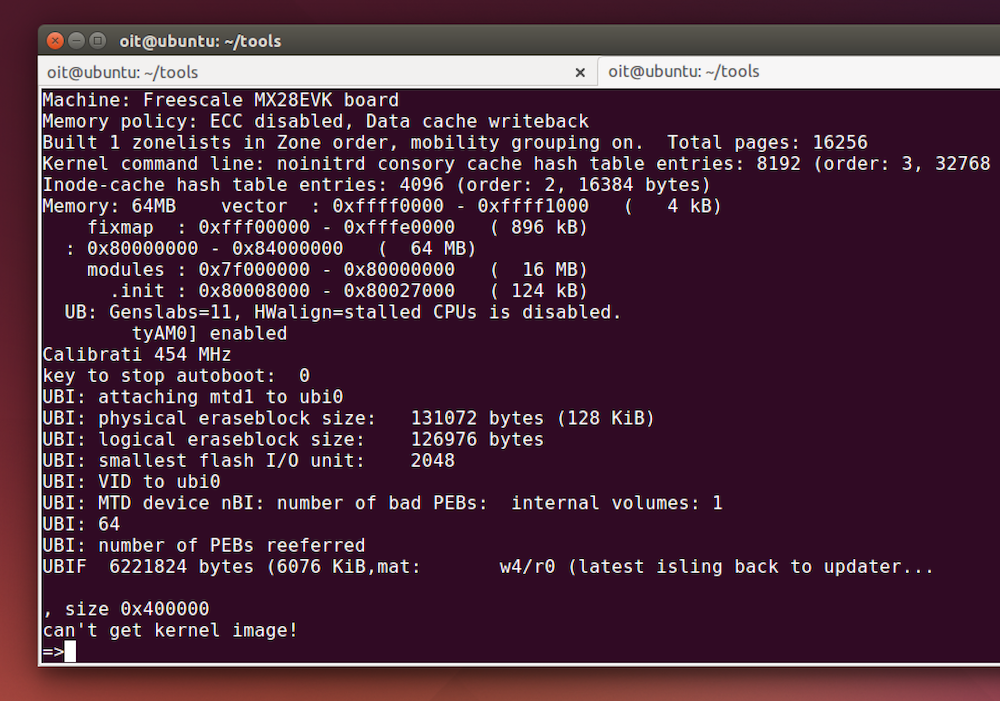 At this point we have a shell but not a root shell. By executing printenv we see that the arguments used during boot are:

Using setenv we can alter the bootargs that are used at startup and cause the Wink Hub to boot into a root shell. We use the following commands to accomplish this:

And then reboot with:

How did we know init=/bin/sh needed to be added? Well, the course sort of glosses over that detail but a quick google turns up this:

So adding init=/bin/sh to the bootargs allows for booting directly into a shell.

Well, this is glossed over in the course as well. Looking at the “app_boot” environment variable though we can get some clues. It performs appboot_args which we can guess probably sets up the boot args that are being modified with /bin/sh. It then proceeds to perform nand read. What does that do?

According to the Uboot README

So this command reads 0x400000 bytes from the “offset/app-kernel” to the “loadaddr” location. This seems to be loading the kernel from the NAND flash into memory. It then proceeds to do bootm ${loadaddr}.

What does the bootm command do?

According to this documentation: 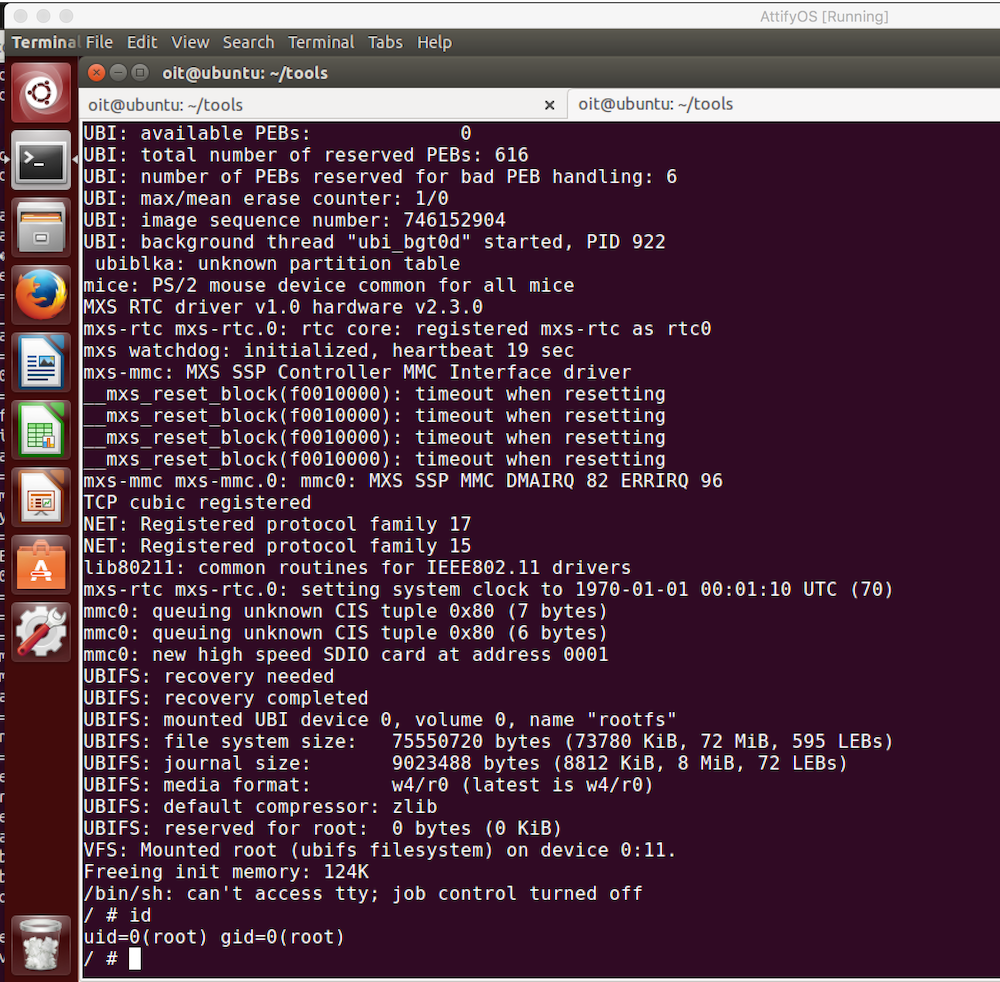 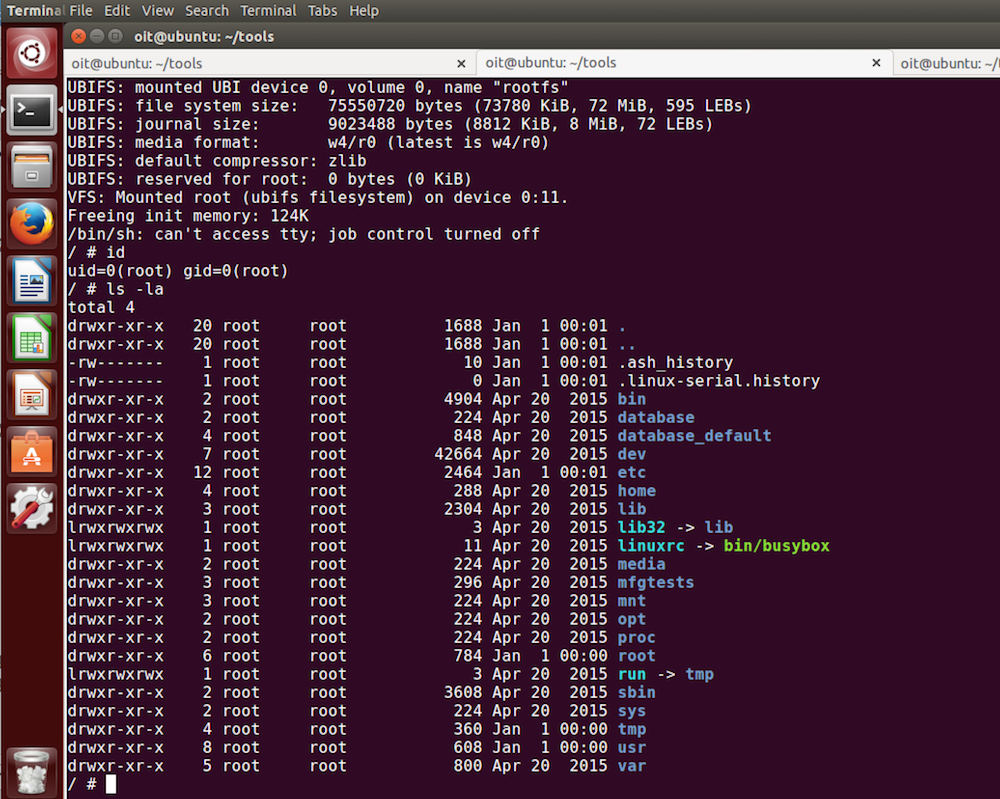