I really enjoy threat modeling and thinking about all the ways things can go wrong in a system. For those unfamiliar with it, the general idea is to first determine:

What Are We Building? (Draw A Picture)

When threat modeling the first step is to get clarity around what is being built. A common way to achieve this is by drawing a picture. Architecture diagrams, dataflow diagrams, attack tree diagrams, etc. can all be used and if they already exist, are good starting points and save the work of having to draw new ones from scratch. With that said, what are we building?

Today we will be building out a continuous integration pipeline that allows an engineer to push their code to a git version control system, which will then build, test, and deploy a docker image to a container registry. To illustrate this process, I have put together the following diagram: 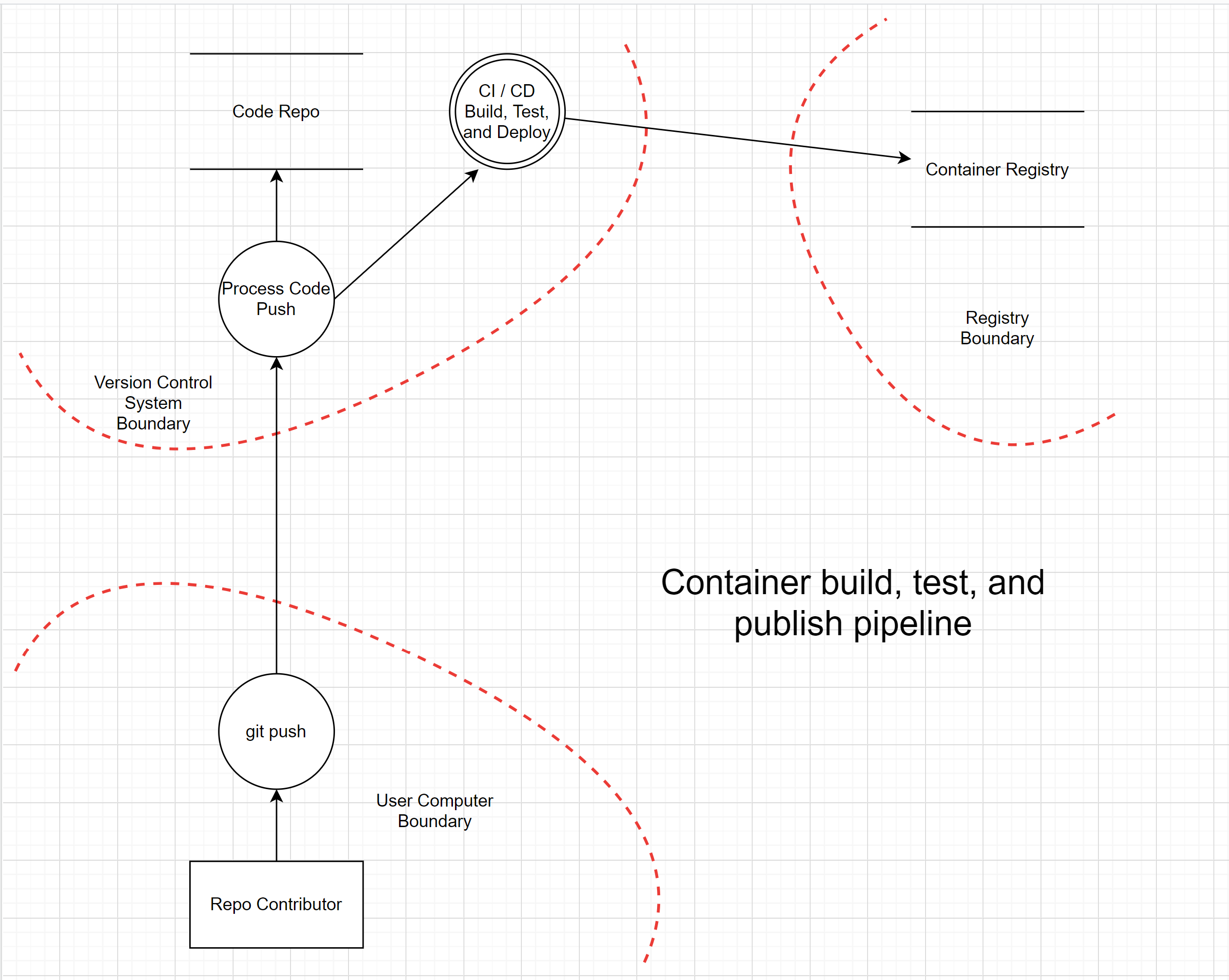 When thinking about potential threats to a system the particular STRIDE categorization is really un-important. Whether something is tampering or spoofing really doesn’t matter. For example, one could make the case that altering an ip address in a request could be tampering or spoofing. The point of STRIDE is really to provide a catalyst to get people thinking.

There are some other catalysts though that I find useful beyond STRIDE:

So now that we know what we’re building and have some things to prompt our creativity, what could possibly go wrong in our CI pipeline deployment?

After spending some time looking over the diagram and thinking about potential threats, here are some that I came up with. For each one I also attempted to think about some potential mitigations that people may choose to implement to address the potential risk.

A developers laptop is lost or stolen. The hard drive is not encrypted so the attacker is able to use a tool such as Konboot to bypass password authentication and have commit access to all the repositories and ssh access to all the systems the developer has access to.

A developer commits AWS secrets to version control either accidentally or on purpose. An angry employee with read access to the repository finds the secrets and proceeds to use them to steal end-user data.

A nation-state attacker proceeds to get one of their operatives employed with the company. After performing reconnaissance on the corporate network, they determine that the version control system has been operating with unpatched vulnerabilities. The attacker proceeds to compromise the version control server and implant malware which backdoors the company code releases

An popular opensource dependency used by the application gets compromised by an attacker. The attacker implants bitcoin mining software into the dependency so that consuming applications will mine bitcoin for the attacker

Developers are given access to the container registry so that they may publish POC / testing images or pull production images for debugging purposes. Container registry permissions are not well segmented and allow a developer to push images to the same registry that production images are pulled from. A developer proceeds to publish a backdoored image directly to the repository and tags as latest, knowing that it will get picked up as part of the next deploy.

At this point I’m going to stop as this post is already getting kind of long but I may come back and update with any more threats / mitigations that I feel may be important and may be useful to others thinking about the threat model of a CI pipeline. Feel free to leave comments on any you might think of to share with others.

What Should We Do About It?

At this point a team would review the threats and select any mitigations that they felt should be implemented to address the identified threats. Since we aren’t building this for real, we’ll obviously skip this step.

Did We Do A Good Job?

Well… I suppose I’ll leave that up to the readers to decide. There are certainly more threats that I haven’t identified here. This was only conducted at 1 level of zoom. You could for example zoom in specifically on the build, test, deploy multi-process circle of the diagram and see what threats you might find there. Or perhaps, there is another diagram that would depict how an image gets pulled from the registry and actually deployed to ECS / EKS / Fargate, etc.

I hope you have enjoyed seeing how I approach threat modeling and perhaps you might feel encouraged to start doing something similar in your organization. Or perhaps maybe some threats were identified here that maybe you hadn’t considered before and you might be inspired to review some of the security controls in your organization.